Getting Back to Work

I heard a powerful sermon several years ago at PELC by Pastor Orville Brissett. He is currently a Pastor in the Allegheny East Conference; I think he was in Allegheny West at the time—or perhaps, it was Southeastern Conference (he served in both).

In any event, Pastor Brissett preached on my favorite Bible character—Elijah. Elijah was at his lowest moment—which, ironically, came after perhaps his greatest moment. We all know the story.

Elijah had just faced down the prophets of Baal and called down fire from heaven. The people of God had returned to God, falling on their faces and saying, “The Lord, He is the God, the Lord, He is the God” (I Kings 18:39). Elijah thought that surely God’s people were finally cured of their infatuation with Baal, that there would be a great revival that would either sweep the demonic duo known as Ahab and Jezebel into the church of the living God or sweep them out of office.

But Jezebel in particular, did not get the memo. Instead, she sent a message to Elijah, ”Get out of town, by sundown—or, you are a dead man.”  Elijah ran more than 100 miles and ended up in a cave, whereupon, God asked him, ”What doest thou here, Elijah” (I Kings 19:13)?

After Elijah gave God his not-so-good reasons for running, God gave him several tasks: Anoint Hazael, king over Syria and Jehu, king of Israel and anoint Elisha to take his place. What God was saying to Elijah, like Elder Brissett was saying in his sermon was, “Get back to work.”

Covid 19 brought with it two of the most challenging years imaginable for the church—completely closed churches for approximately 18 months in most places and the reluctance to return by a significant number of church members when churches reopened. There are a significant number of ministries in many churches that stopped due to the pandemic that have not re-started.

But it is possible that the worst of Covid is behind us (I say that carefully because I have thought that a couple of times—only to have Covid come roaring back). Yes the numbers are creeping back but so far, while people are still contracting Covid, not nearly as many are dying from Covid.

And while anyone who has been to a gasoline station or a grocery store would hardly call what we are going through now as normal (when I was in California last month, I saw premium gasoline sell for as much as $8 plus), things are much more “normal” than they were for most of 2020.

And while a lot has changed since words like “Covid” and “pandemic” changed our lives, one thing has not changed: The mission of the church and the commission from God to the church. Go into all the world and make some disciples. In other words—as Elder Brissett would say, “Get back to work”.

I want to suggest three areas where we have to “get back to work”:

1. Public Evangelism: Public evangelism was a challenge before Covid. Just before the pandemic, I happened to look at the tithe and the baptismal numbers from 1985 in Regional Conferences. I discovered that our tithe is four times greater than it was in 1985—that the Northeastern Conference by itself had approximately the same tithe last year than all of the Regional Conferences put together in 1985. But despite those increased resources, our pre-Covid baptisms were one third less than they were in 1985 and in the last two years, they are half of what they were pre-Covid.

Now—there are obviously a number of Covid-related reasons. It is hard to baptize people into the church when the church doors are closed. And—just the fact that the Seventh-day Adventist church survived the pandemic is a testimony to God and His people.

I think that if at the end of 2019, you came up to pretty much any Adventist administrator and said to them, “In a few months, your churches will pretty much all close and not re-open for nearly 2 years,” most of them would have said, ”That will force us into massive layoffs and certain churches and institutions will close their doors for good.” That did not happen.

So while there are certainly very understandable reasons for our considerably lower baptismal numbers, those new numbers cannot become the new normal. We have to do what God says. We have to expand His kingdom.

The fact is that our survival as Regional Conferences in the future depend on the kind of growth that we have had in the past. Our conferences do not have the resources that State Conferences have; our per capita tithe is approximately half of what theirs is. We do not have institutions such as hospitals and college and university campuses as part of territories, with the constituency that they draw and the institutional payrolls that they bring (except for Oakwood). We have to grow our church the old-fashioned way—through evangelism.

How we do public evangelism will be different post-Covid; whether we do it is not optional. We have to get back to work.

2. Personal Evangelism (witnessing to others). It’s not either public evangelism or personal evangelism—it’s both. The gospel commission is not just for preachers; it’s also for parishioners. We all have to get back to work; it’s what our African brothers and sisters—where the work has exploded—call, “Total Member Involvement.”

I believe that “back in the day” when people like the late Elder C.D. Brooks was baptizing zillions of people, it was because of Total Member Involvement—even though they didn’t call it that then; in fact, I don’t think they called it anything. It was just church members working; I saw it in my own family. I saw Elder Brooks baptizing people to whom my father gave Bible studies.

I saw my sister, Nancy, pick up that mantle and give on-line Bible studies. A few weeks ago, two of the recipients of those Bible studies, got baptized.

My responsibilities have placed me back on the road again. I have the unique privilege of visiting at least one church in every conference—plus the West Coast—every year. I just have not seen a whole lot of ministry to our children and young people.

Once again—it is clear that we probably cannot do the same things that we used to do in those areas. But it is even clearer that we have to do something.  We have to get back to work.

And as we get back to work, we shall see God working for us, in us and through us. Because this church—is His church. 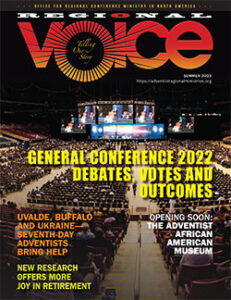