“Whatever God calls you to, he will equip you for.” These are the words of Dr. Jerome Skinner, the Assistant Professor of Old Testament Exegesis and Theology at Andrews University in Berrien Springs, Michigan. Here is a man who was called by God, and allowed God to lead him. From student to professor, from mentee to mentor. This is his story.

Upon leaving the Navy in 2001, Dr. Skinner had planned to move to Texas, but upon his mother’s request he decided to move back home to Buffalo, New York for a few years. While home, Dr. Skinner attended a youth evangelism series led by Pastor Phillip Westly Jr. It was during the series that Dr. Skinner had decided to give his life to Christ.

In the area of academics, Dr. Skinner had no intention of going into the field of theology. He had planned to attend St. Joseph’s College in Brooklyn, New York to study nursing. A lot of members in his family are nurses so it only made sense to him to go into that field. But one day as he was playing basketball by himself, he heard an audible voice ask him, “What are you doing”?  As he looked around no one was there. Then he heard it again, “What are you doing”? Realizing it was the voice of God he immediately began to pray. 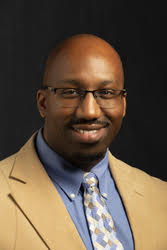 Before receiving his doctorate in Old Testament Biblical Studies, he was under the supervision of Pastor James Clark, who took him under his wing. For a few years, Dr. Skinner studied with him in Syracuse, New York.

For Dr. Skinner, attending Andrews University was about continuing the family legacy. His mother attended, as well as his grandfather, and other family members, so he decided to attend to keep the family tradition alive. Although, going into school, academia was never his profession of interest. Until he met Dr. Orlando Moncrieffe, who he says was his, “first positive encounter seeing a black man who was both Godly and brilliant.” It left a deep, and lasting impact on him for which he will always be grateful.

When we allow God to be the leader in our lives, he puts people in our path as guides to help us along the way. People who are strategically placed to help, encourage, and inspire. And that’s exactly what God was doing for Dr. Skinner.

Dr. Cliff Jones was serving as the Associate Dean of the Seventh-day Adventist Theological Seminary at Andrews University while Dr. Skinner was a student. Upon getting to know him, Dr. Skinner came to learn that Dr. Jones had been a young intern at the church in Buffalo, New York where he would later be baptized. Says Dr. Skinner, “Being able to see people that looked like me, who were Godly men, had a deep impact on me.”

God was not finished placing people on Dr. Skinner’s path to help him on his journey. It was when he met Dr. Jacques Doukhan, who is a Jewish Christian, that he was influenced to turn his attention towards Biblical studies as a vocation. For three years Dr. Skinner worked under Dr. Doukhan, who became his mentor and taught Biblical studies. It was then Dr. Skinner began to realize his God given gifts.

Graduation was soon approaching, and Dr. Skinner was actively searching for a job, but there seemed to be no openings. There were those who tried to discourage him, but still he continued his search for that which was specific for him.

Dr. Skinner knew at some point Dr. Doukhan was going to retire, but he often wondered when? And also, who would take his place?  Once Dr. Doukhan did retire and the position opened up he debated if he should apply, questioning if he would even be eligible for the job.  Through his doubts and questions, his lovely wife was there, encouraging him. Saying to him, “You can do this, God has prepared you.”  So he applied for the position.

A little time went by and there was talk amongst the Regional Conference presidents, of a young African American that was applying for the position. He knew Dr. Clifford Jones, President of Lake Region Conference and Elder Dana Edmond, Executive Director of the Office of Regional Conference Ministries knew of him, but was unsure if everyone else knew who he was. Not long after he was accepted for the job. In December of 2018 he was hired as assistant professor and by July 2019 he started full time.

Dr. Jerome Skinner, was the first African American in the history of Andrews Theological Seminary to teach in the area of Content Theology.

There are two things that Dr. Skinner enjoys most about teaching. The first is watching people learn and how their eyes light up when they begin to understand, make connections and when they begin to make the points and understand for themselves. The second is seeing other people of color become encouraged. He stated that there have been times that people have told him that seeing someone that looks like them has been encouraging. Ensuring them, that they can do it!

Apart from teaching, Dr. Jerome Skinner is the organizer for a Biblical Studies conference for Pentateuch. He partakes in panel discussion, writing articles, and mentors people as well.

Quotes and Words of Advice from Dr. Jerome Skinner:

“Whatever God calls you to he will equip you for.”

“In this country our intelligence as African Americans has been in question. You have to consider the source of what you believe. You have to trust that he will equip you.”

“Learn in a way that you can use your scholarship in a practical and relevant way. Taking complex information and making it simple for everyday people. You can be a blessing for many people.”

“People need to see something that will inspire them, rather than just blaze the trail on their own.”

For this black history month, take the time to think of all of the people God put in your path to help you along your journey. Whether it was a friend, family member, church member, mentor, or even a teacher. If possible, thank them. They were strategically placed by God to get you to where you need to be. God always has a plan for our lives. It’s up to us to let go and allow him to lead.