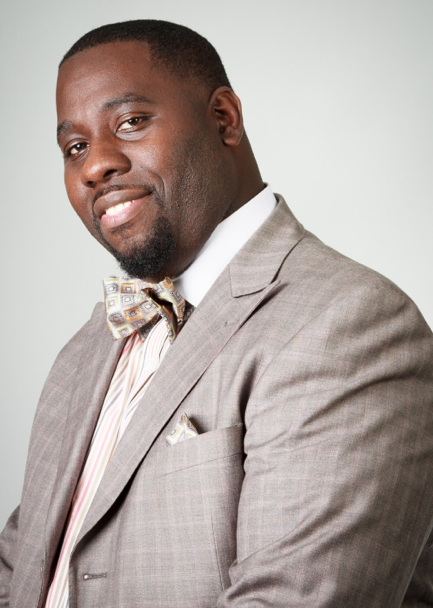 Have you met Elder Vandeon Griffin?  If you’ve seen a short, dark skinned man with the biggest smile and the personality to match, then chances are you’ve met Elder Griffin!  Hailing from Greenville, Mississippi, he is married to the former Kimberly Tinson (the love of his life) and has one daughter, Kalin (the joy of his life) who is presently a student at Pine Forge Academy. He received his undergraduate degree from Oakwood College (now University) and graduate degree from Andrews University Seminary.  He is presently completing work towards his D. Min. at Andrews University.

Elder Griffin has served as a pastor, much sought after interim pastor, Youth Director, and Sabbath School Director in the South Central Conference.  During those years, his talent and vision made a great impact on the young people of the conference. Engaging the youth to be a part of worship and to enjoy worship was evident in the conference wide recording youth choir, Jesus Crave, which began with his vision and leadership.

He has taken that same energy and vision to his present position where he serves as the Associate Youth Director for North American Division Youth Ministries. In this capacity, he provides the personnel, financial, and visionary resources for Union Youth Directors to assist in putting programs in place for the youth in their respective areas.

One of the goals that Elder Griffin’s office is initiating this year is Touch 10,000. The inspiration for this is mission work and service.  Elder Griffin is very passionate about getting youth involved in missionary work and service.  There is a world waiting out there that needs a touch.  He believes that touch can and should come from our youth.  His desire is to get the youth so acclimated in missions and service that “it” is no longer “a project”, but an extension of who they are.  So the goal of Touch 10,000 is to have every youth touch 10,000 people in some way in the course of a year.

He is also excited about the Sabbath School initiative, Ignite Bible Study and Discipleship.  Growing the Youth Sabbath School attendance by introducing small groups which have student involvement through teaching, practical application, and music.  In this model, the students are not just on the receiving end of the lesson study but are involved and participating.

As one can tell, Elder Griffin has allowed no grass to grow under his feet since he began this position earlier this year.  He credits having the opportunity to serve as the youth pastor in his home church and past experience as an intern at the Highland Avenue SDA Church, during his years at the Seminary, as preparing him for this position.  As an intern he was given the opportunity to lead out in Youth Church.  The team was given a full budget were they were able to fund mission and service projects, and make sure that the youth of the church were able to take full advantage of the programming offered on every level of the denomination structure.

Elder Griffin, as alluded to previously, has an engaging personality; a “people’s person”.  Therefore, it is no surprise when asked about some causes he cared about they were all people focused.  He has concern for the cause of orphans and children in need of adoption.  Elder Griffin is passionate about family preservation and Church Leadership.

Though Elder Griffin is an inspired and illuminative visionary and has inexhaustible ideas; his most intense interests will be found in the presence of his lovely wife Kim and his daughter Kalin.  He states that his happiest moments are “hanging out with Kim and Kalin.”  He enjoys traveling with them and finds cruising to be the most enjoyable.

When speaking about his travels, Elder Griffin shared something very interesting.  He has made it sort of a hobby to locate at least one Seventh-day Adventist church everywhere he goes and find out the history of said church.  He says, “Traveling is a learning experience”, and he has made it his priority to find out as much as he can about his church.

Any parting words of advice for upcoming young men and women who have an interest in ministry?  Elder Griffin’s response was, “missionary work”.  His recommendation is to spend at least a year in missionary and or service.  He states, “It is life changing.”

A love for family, a passion for people, and an advocate for missionary and service.  You have now met Elder Vandeon Griffin.