On April 25, 2019, in the chapel of the East Central Africa Division office, there was an historic meeting between the Regional Conference leadership and the Adventist leadership in Africa.

The purpose of the meeting -which was called “A Transatlantic Family Reunion”-was to promote understanding, to build bridges and to discuss mission collaboration between people who share a common heritage in order to expand the kingdom of God.

Participating in this historic summit were the following leaders from the Adventist leadership in Africa:

A welcome dinner was hosted by the East Central African Division on Wednesday, April 24. The highlight of the evening was a powerful and moving message by the host President, Dr. Ruguri. A transcript of his message is attached. 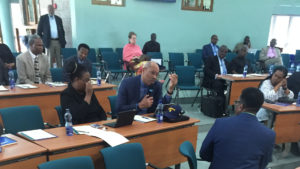 The next morning, after a powerful devotion by Dr. Cox and opening remarks by Dr. Ella Simmons, Vice President, General Conference-the highest ranking African-American leader in the Adventist Church-the Transatlantic Family Reunion began. The highlight of the day was a candid-almost therapeutic-discussion between the two groups of how the lack of contact between the two groups led to misperceptions of each other. Even where there were not misperceptions, there was a great lack of understanding of each other’s work. For example, some among the African leadership struggled to understand exactly how Regional Conferences worked together across the normal union conference/division lines that govern the rest of the Adventist Church. For example, Regional Conferences have their own retirement program; conferences ordinarily do not do that.

The African leadership expressed admiration for what they called the unique gifts of African-Americans and asked that those gifts be shared with the church in Africa through worker exchanges between the two groups. The African-American leadership affirmed the explosive growth of the church in Africa (nearly 45% of Adventists are African) and recognized that the cutting edge of evangelism in Adventism is in Africa.

Most important of all, each group vowed not to allow anything to cause separation from each other ever again. A second “Family Reunion” is being planned for West Africa and the African-American leaders are planning to invite the African leaders to come to their conferences and preach in their churches when they come to the United States for meetings this October.

It is a great blessing and honor to address the delegates of the first Transatlantic Family Reunion meetings! I am aware that this meeting represents the realization of a dream that began in the hearts of some in this room more than 20 years ago.

We too have been eagerly anticipating a time when God would allow for us to develop a greater connection across the ocean and our hearts are now full due to the realization of this long-awaited event.

We all have a right to rejoice at what God had done to bring us together at this moment, but even so, it would not be right for us to claim any credit for it. Travel with me and observe a scene on an African plain, hundreds of years ago.

Imagine this scene that took place long before any of our dreams began; where an African mother called out, searching in vain for a missing child who had been dragged away to a cruel slave ship. Imagine how the dream of being reunited burned in the hearts of that mother, and of that child!

Visit with me to the middle of the Atlantic where, deep in the heart of a dank ship, a newborn infant was born wailing his dreams in a language only his African mother could understand, about a longing to see the African sun. Many of you, by coming to this land are fulfilling that dream today.

Now, journey with me to witness the slave, with tear-filled eyes, searching the horizon for the place in his dreams where his daughters are playing with others in their African village. His eyes diverted to the horizon in a futile effort to ignore the cruel spectacle before him where they are being sold to the highest bidder on an auction block. In the hearts of all these individuals and in the hearts of millions more, the dream of a transatlantic family reunion was a sacred. It was sacred, because it is a dream that began in the heart of God Himself.

But the evils of the plantation did lead those suffering ones to begin to dream of another place. A place that slave ships and inhumanity could never take from them. God comforted them with a new dream, expressed in songs like the one that says “steal away, steal away home – I ain’t got long to stay here”.

The God that met those slaves on the plantation replaced their dreams for a temporal reunion with the promise of an eternal one. The same God that reunited the family of that African slave in Egypt named Joseph became the Hope of those descendants of Africans who found themselves enslaved in what was called the “New World”.

But today we recognize, as Joseph did in his time, that what others meant for evil and selfish advantage, God is able to use for good.

Joseph’s dreams of a Family Reunion appeared to be far out of reach. But when he began to dream the dreams of God, everything changed. When he set his sights on the vision of God, the dreams of God became the path to freedom.

And this is the true purpose for our meetings here at this time. This is not merely a reunion of earthly families long separated by time and circumstance. We are called here to this place to dream the dreams of God; to understand His vision and purpose for this appointed time in Earth’s history.

It is good to fellowship and enjoy the moment just as Joseph did when he was finally reunited with his father and his brother Benjamin. But we must never forget the purposes and dreams of God that have called for such a reunion to take place.

Our task during this time is to allow God to show us the way to a Better Land, so that we, and the people that we lead and serve can enjoy a far better reunion than what we are experiencing now.

It is now so very fitting that the descendants of Africa that have built nations abroad, should now return to the land of their ancestors to be used by God to build a better land. To help to build up a nation not made by bricks and steel, nor on the philosophies or cruelties of man, but rather, a Nation that shall never fail, built on the foundations of Divine Mercy, Grace, Hope and Love.

In God’s timing, the family of Joseph was brought together. In God’s timing He has brought us together for an equally essential purpose. When we, who were separated by slavery are reunited by grace, in bondage only to the true Master and for His Kingdom, the destiny of millions will be changed.

It now only remains for us to be faithful stewards of every tear and every drop of blood that was shed in the struggle for such a moment. It remains for us to allow this to be a meaningful reunion that is worthy of the sacrifices that were made in order for it to occur.

Today, let us come together in one accord and pray that the Lord of the Harvest will unite us in faith so that His Spirit may prepare our lands for the Great Family Reunion in the Earth Made New. This is the dream that God is realizing today.

Martin Luther King Jr. once said, “With this faith we will be able to hew out of the mountain of despair a stone of hope.”

We are the ones that Christ is sending to proclaim good news to the poor in our lands.

Ours is a very practical assignment. We must move beyond mere dreams into the serious work of setting the captives free.

We must do the hard work of destroying the strongholds that still enslave so many millions of those that we serve. We must remember that we are the representatives of the God of all Comfort to the suffering and not the god of convenience to the satisfied. Now that God has chosen this time to reunite His family across the Atlantic Ocean, we must work in a manner worthy of the sacrifice of our ancestors, and especially of our Savior to build His kingdom, freeing the captives both for now, and also for all of eternity.

And when this happens, when we allow freedom to ring, when we let it ring from every village and every hamlet, from every Nation, every state and every city, we will be able to speed up that day when all of God’s children, Africans and Americans, Men and Women, Young and Old, will be able to join hands and sing in the words of the old Negro spiritual, “Free at last! Free at last! Thank God Almighty, we are free at last!