It is not altogether unusual for entities whose primary constituencies are not African-American to push back a little on celebrating Black History. It is impossible to tell the story of what African-Americans have done in the United States without also telling what was done to them-and who did it. The hard truth about both the United States and the Seventh-day Adventist Church is that both of these special entities share an ugly racial history.

Black History Month involves re-opening those wounds-which can be a challenge. Black people have to re-live things that were said to them (“You will be more comfortable joining the church across town”) and done to them (like the majority Caucasian school who decided not to have a valedictorian in the year where the student with the highest grades happened to be black) ,and the racial epithets hurled at them (like the time my mother and I were walking back to our car from the library in Cleveland, when we heard someone who was loud but unseen calling out from the distance, “Hi, N- – – – -!”). Virtually every black person in America who is above a certain age has a story like that.

While the re-telling of certain aspects of the black experience are painful for black people, they are often uncomfortable for Caucasians who are reminded of what the people who share their culture did to another culture-solely because they were not like them. 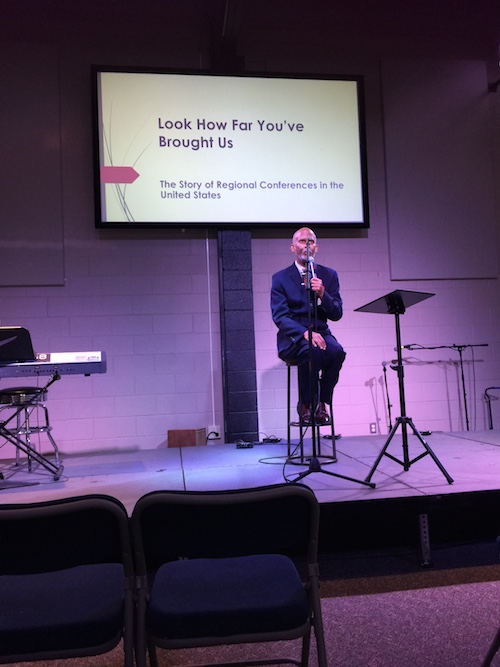 Perhaps the seminal moment in Elder Wetmore’s life as it relates to seeking racial understanding came when he and his family lived on the island of Guam. While in desperate need of a job, he interviewed for a job in the secular world-a media position in Guam-only to be told “You have all the right qualifications; but you are the wrong color.” It was then that the future Elder Wetmore realized what it was like to be denied opportunity solely on the basis of the color of his skin. He has never forgotten.

His journey towards better racial understanding accelerated when he came to Nashville as the Pastor of the 1,800 member Madison Campus Church. He discovered that he and the Senior Pastor of Riverside Chapel SDA Church, Elder Furman Fordham, had much in common (former student missionaries, both senior Pastors of large churches, etc.). But even though they lived in the same city, they had never connected.

They began meeting for breakfast on a regular basis and out of their relationship grew “Imagine Nashville”, where the churches in the Nashville area began coming together on a periodic basis for worship, fellowship and ministry.

And when one of his Caucasian members made the novel suggestion of a Black History Month in a Caucasian Church, Elder Wetmore was open. He invited 4 speakers; Elder Dana C. Edmond,  Executive Director for the Office for Regional Conference Ministry, Dr. Hyveth Williams, Professor, Andrews University Seminary (Dr. Williams ultimately could not come due to a funeral), Elder Furman Fordham, Senior Pastor, Nashville Riverside and President Benjamin Jones, Jr., President, South Central Conference.

Each speaker spoke for both of the Sabbath Services that Madison Campus has each week and was received kindly by the membership there. Elder Wetmore reported that church attendance during the month of February was the highest it has been “in 3 or 4 years”.

Elder Wetmore closed his reflections on this historic venture by saying, “Any time we seek to see the world through someone else’s eyes, we are emulating Christ”, who came to this earth to experience what we experience in order to save us.

Elder Wetmore said that they are already planning to have Black History Month again next year.