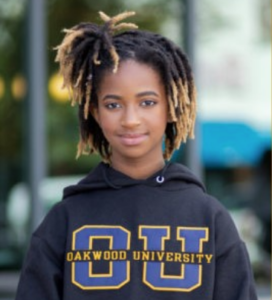 EBONY Magazine is kicking off Black History Month with Oakwood University’s wonder-freshman 13-year-old Alena Wicker front and center on the cover of a commemorative issue. Thanks to your votes, Alena was selected as one of the top 10 HBCU STEMQueens in EBONY’s HBCU STEM Queens competition this past fall.

Alena is a Biomedical Sciences major at Oakwood University. “As a pre-med student,” she said, “my hope is to become a flight surgeon and work with astronauts for NASA. I’ve had a passion and love for STEM ever since I was four years old.” Alena interned for NASA last summer and has started a company, The Brown STEM Girl, to create opportunities for girls of color in STEM and encourage them to major and work in STEM careers.

Alena is the youngest student ever enrolled at Oakwood University. “Alena was all of 12 years old when we recruited her to Oakwood. During Oakwood Live 2021, we received her with open arms. Alena is considered among the less than 1% of young people regarded as cognitively gifted. Her presence speaks well of the level of STEM education here at Oakwood University,” said President Pollard.