The Passing of Mrs. Sharon Lewis – A Personal Loss 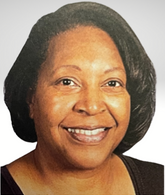 Usually in this space, I am either writing, co-writing, or requesting that our Communications Director, Elder Darriel Hoy, do the writing of a statement on behalf of the Regional Conference Presidents Council. We did that a few weeks ago with the loss of Elder Charles Bradford – Mrs. Lewis’ father – and a few weeks prior to that with the loss of Elder and Mrs. Henry Fordham.

But this time is different. I am writing this by myself, for myself – not that they are not grieving as well; they are. But this-is personal.

That does not mean that I did not have genuine affection for Elder Bradford and Elder Fordham (I did not know Mrs. Fordham – but from what I heard from everyone, I wish that I had) – I absolutely did. In fact, I stare at pictures of Elder Fordham and say to myself “I still can’t believe that he is gone.”

I had occasion to visit Elder Bradford in his home a few times and had what ended up being a final visit with him in the hospital – though I did not know it at the time. He was always so alive and gregarious and lived so long that it did not occur to me that even he could not forever frustrate Father Time.

No-it was combination of those deaths – plus the death of Kim Taylor, the lady that sat next to me for years at Tennessee Titans games (who I talk about in the Fall Edition of the Regional Voice). The death of Mrs. Sharon Lewis – wife of my predecessor in this office and the former First Lady of the Allegheny West Conference – piled up on top of all the other deaths; it was almost too much.

I worked with Mrs. Lewis for a number of years after she and her husband moved to Huntsville when he became the Executive Director for the Office for Regional Conference Ministries. I was one of the first to talk to her about becoming the Principal of Oakwood Academy. Oakwood Academy is the largest school in the South Central Conference. The school year was about to begin, and the principal position was open.

It was a critical time, and there was a critical need. The Lord sent Mrs. Lewis to Oakwood Academy. From my vantage point, she had the perfect personality and skill set  to address the many challenges that come from being a principal anywhere – but especially in a unique setting such as Oakwood Academy – located on the campus of the largest black Seventh-day Adventist institution in the world and a constituency school that was jointly operated by 9 different churches that had nearly 20 Pastors.

She was principal when the long-delayed Phase 2 of the Oakwood Academy building project was completed and played a crucial role of which most people were unaware.

Mrs. Lewis fully embraced it. There are very few people anywhere that I ever enjoyed working with more than Mrs. Lewis – whom I always called “Mrs. Lewis”. She was unfailingly  pleasant – I never saw her upset or with an attitude. The only complaint I ever had about Mrs. Lewis was that she was so pleasant was that it was very hard to ever have a quick conversation with her; in fact, I don’t think I ever did. I would call her about one thing and before I knew it was 15 minutes later and we had talked about 10 other things.

She was absolutely devoted to her parents. Our office wanted to involved Elder Bradford in various things – praying for the groundbreaking of our new office building, praying at our Regional Conference Convocation for the new North American Division, being interviewed for an article in The Regional Voice, etc. – Mrs. Lewis was my contact. She would always see to it that Elder Bradford was where we were requesting him to be or had the needed technology for us to connect with him virtually. Then, she would go over to his home and connect him to us.

Mrs. Lewis was hospitalized because of Covid 19. I would want to be very careful and not say things that I don’t know. But I knew Mrs. Lewis well enough to believe that she was very careful to protect herself and others from this terrible disease that has taken 700,000 of the lives of our fellow citizens in this country.

It just seems to me that this disease – which continues to threaten the lives of every single one of us – could be eradicated in this country if all of us did everything we could do and worked together to fight Covid. If we were less enthralled with our own non-medical opinions and talked less of our perceived rights for ourselves and more of our responsibility to others, we would lose fewer good people like Mrs. Lewis.

There are not enough people like Mrs. Lewis; we can’t afford to lose the ones we have. Except – we just did.

Our most sincere condolences to her husband, Elder James Lewis, their son, her brothers -and especially, her mother, Mrs. Ethel Bradford. It is unimaginable to me that after having buried Elder Bradford a week ago, this family has to endure this again.

I learned about Mrs. Lewis passing as I was returning from my 3rd funeral in 8 days. So many people seem to be leaving lately – maybe that is a sign that Jesus is coming.

I believe that Mrs. Lewis was ready for Jesus’ coming. I know she would want the horrific tragedy of her death to be what makes the rest of us think about whether we are ready.

I have said this a lot lately; I’ll say it again:

Even so, come Lord Jesus.