Farewell and Welcome to the Byrd Family

On successive Sabbaths during the month of August, the ministry of Dr. and Mrs. Carlton P. Byrd – newly elected President and First Lady of the Southwest Region Conference – was celebrated and affirmed in different ways.

On August 14, the Oakwood University SDA Church bade farewell to the Byrds after 9 and a half years of ministry as the Senior Pastor of that church. During that time, the Lord blessed the Byrds and the Oakwood University Church in a singular manner. Over 800 souls and nearly 1.5 million dollars in tithe were added to the church. The nearly 45-year-old sanctuary was renovated along with its restrooms.

Then – two long-term goals of the Oakwood University church were reached by the grace of God during Dr. Byrd’s tenure-goals that were considered for a long time to be mutually incompatible; “either-or” goals. They were the building of a K-12 academy campus and a Family Life Center.

On top of all of that Dr. and Mrs. Byrd “added” to the church in a way that no pastor of that church had done in recent memory-the birth of their daughter, Carissa, occurred during their tenure there. 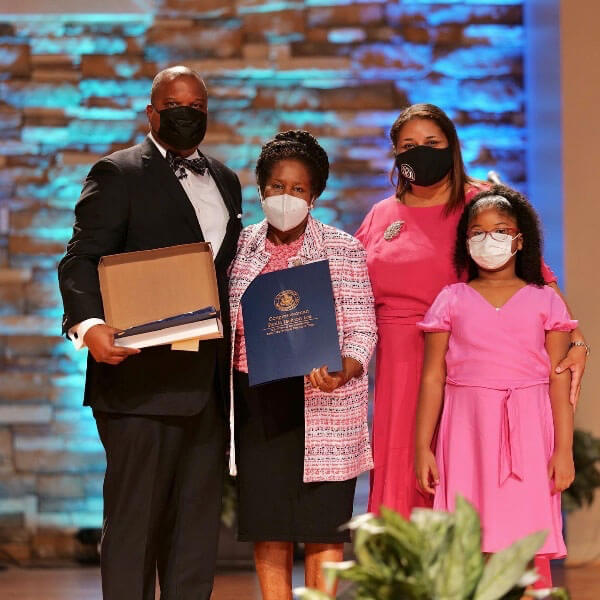 The Oakwood University pastoral staff, led by Acting Lead Pastor, Dr. Toussaint Williams, and Pastor Paul Goodrich, who headed up the Farewell Committee, gave remarks and presentations, as did the spouses of the staff.

Dr. Byrd’s farewell service included the dedication of several babies and fittingly, a baptism that included his daughter, Carissa. After an inspiring and poignant farewell sermon, the Byrd family was honored in a farewell dinner that was held in the Family Life Center.

The next Sabbath, August 21, Dr. Byrd and his family were welcomed to Southwest Region by the Houston-area pastors at the Houston Fondren SDA Church. Ninety-three-year-old Mrs. Claudia Lewis of the Houston Berean SDA Church launched the remarks of welcome and affirmation by referencing letters and resolutions from the Mayors of Houston and Dallas and various other government officials. She closed by reminding the congregants that, “if they wanted to be as fine as me at 93-love the Lord.”

Also giving remarks of welcome was a special guest-United States Representative Sheila Jackson Lee of the 18thCongressional District of Texas. Representative Lee is a Seventh-day Adventist and a constituent of Southwest Region. She presented Dr. Byrd with a United States flag that was flown over the United States Capitol in his honor.

Office for Regional Conference Ministries Executive Director, Elder Dana C. Edmond had the unique privilege of being asked by both Oakwood University Associate Pastor, Elder Paul Goodrich and Houston Berean Pastor, Elder Robert Norwood, to participate in both the farewell of the Byrds in Huntsville and their welcome in Houston. He introduced the new President and First Lady at the Fondren service. He was followed by Southwestern Union President, Elder Carlos Craig, who introduced Executive Secretary Jason North and Mrs. North.

After all of the welcomes, appreciations, affirmations and music, there came the most important moment of all: the preaching of the Word of God. Dr. Byrd preached a powerful message, “It’s Fishing Time”. He reminded the listening congregations that the mission of the church was the spreading of the gospel of Jesus Christ.

After the service there was a welcome dinner for the Byrds. Kudos to all affiliated with these outstanding and affirming endeavors and blessings on the Byrds as they assume their new responsibilities in these unprecedented and final days.