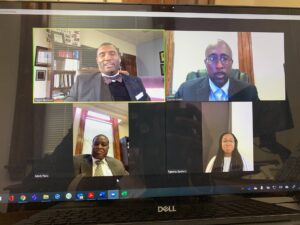 And even though only two weeks have passed since the Career Fair has ended, already two students who interviewed in the Career Fair, have already received jobs (Marcus Hayes and Ms. D. London Anderson-both to the Central States Conference). Other Conference Presidents indicated that they would be hiring as well.

Though the COVID-19 pandemic forced the Career Fair to go virtual, ORCM, the Regional Conference leadership, the University, and its students were undaunted. Eight of the nine Regional Conferences, plus Bermuda, plus the Pacific and the North Pacific Union were represented. MS. Melonie Gurley, the very able Executive Assistant to the ORCM Executive Director, set up eleven virtual interview rooms for the students to be interviewed from 9:00 a.m.-approximately 4:30 p.m. More than twenty students participated. 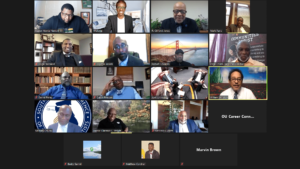 The day began with a stirring devotional thought by Elder Michael Ross, Sr., Pastor, Athens Trinity SDA Church. After the traditional greetings by Elder Dana C. Edmond, Executive Director, ORCM, OU President, Dr. Leslie N. Pollard and Drs. Agniel Sampson and Gilbert Ojwang, from the School of Theology, the students and the Regional Conference Administrators were ready to begin the interview process. All that was left were final instructions from Mrs. Shelley Vaughn, Oakwood University Career/Events Specialist and Ms. Gurley as to the logistics – and the day began.

To a person, the Regional leadership gave high marks to the students for their professionalism and preparedness for the interview process. It seems as though the future of the Regional work is in good hands.